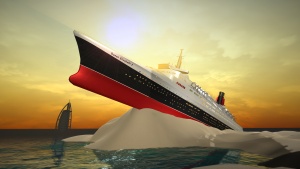 Architectural models, glossy renderings, and virtual reality videos come to life in the fictional last voyage of the QE2 as it returns to its birthplace.

The story begins with an anonymous Glaswegian philanthropist who intends to bring the transatlantic ocean liner into the heart of the city and convert it into a new home for the Glasgow School of Art. Designed and built amid the social and industrial upheaval of the 1960s, the luxury liner returns to a city undergoing extensive change under the auspices of urban regeneration.

From its moorings in Dubai, the ship passes through the Suez Canal, encountering refugee boats in the Mediterranean, oil rigs in the North Sea, disused shipyards on the Clyde and emerging artist enclaves in Glasgow. A soundtrack by cellist and composer Oliver Coates accompanies the ship on its final European cruise.

Continuing Lek’s use of architectural media as a means of social critique, this site-specific simulation transforms the QE2 from a symbol of heavy industry into an institution for art.