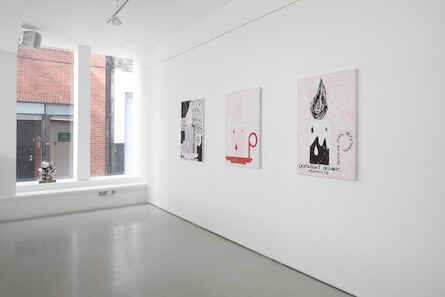 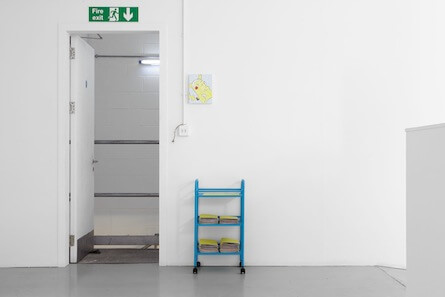 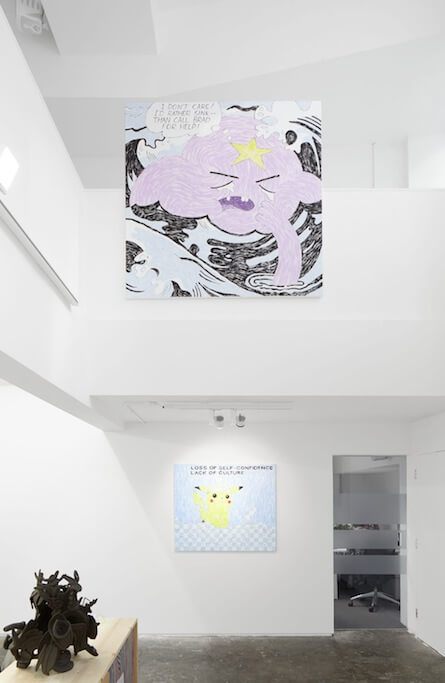 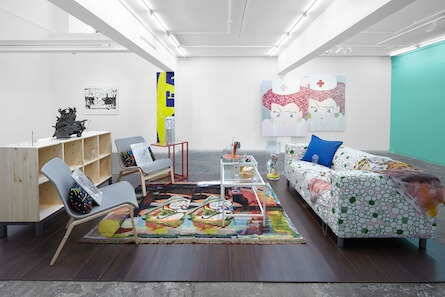 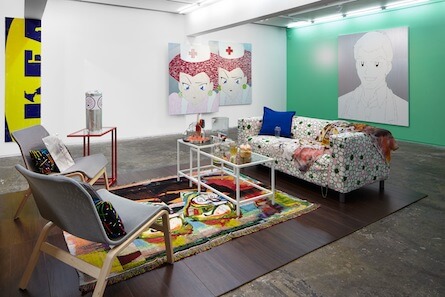 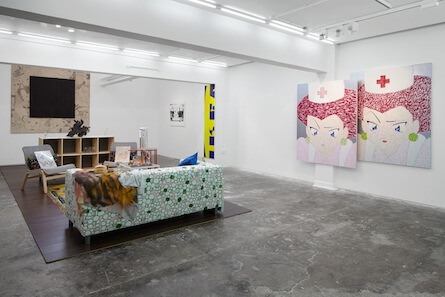 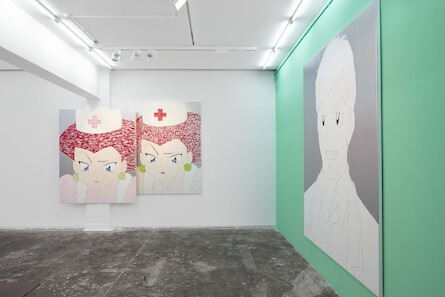 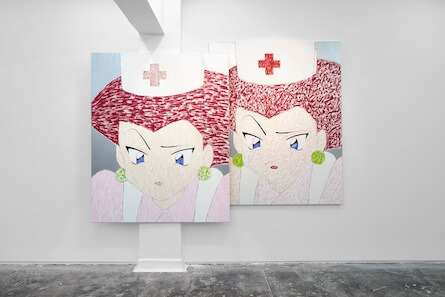 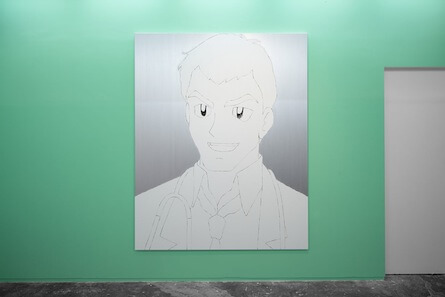 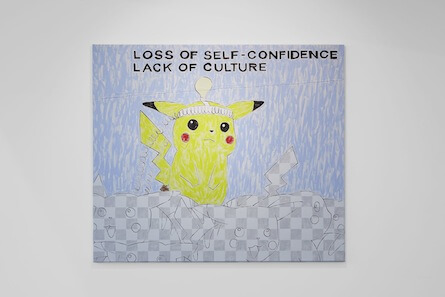 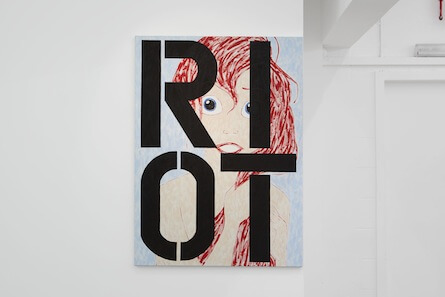 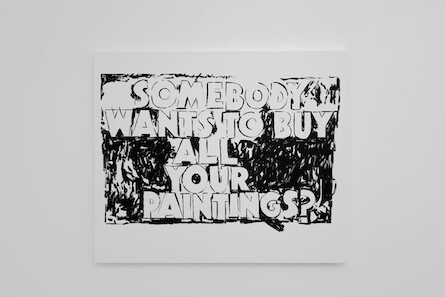 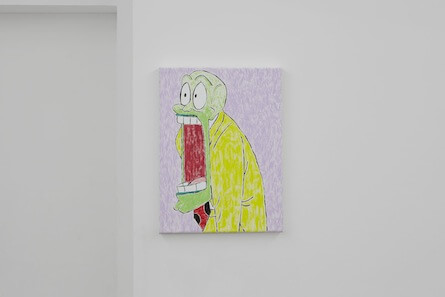 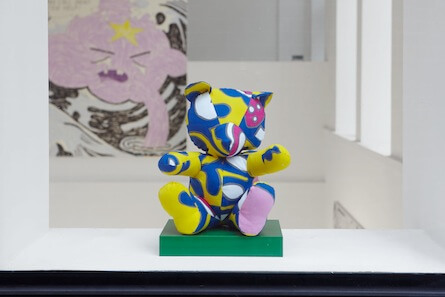 With a special appearance by: ebaE

Around 3 years ago I began curating art online. I was curious to access a network of people that expanded beyond my own locality. It was basically a way for me to geek out on other artists. I emailed people whose work I’d seen online and began hosting their art on badly built pages of HTML reminiscent of those Yahoo GeoCities sites that populated the web back in the dial up 90s. The first artist I worked with was Nico Colón. I saw images online from a show he’d done on a boat in Portland.

I used to work at the Serpentine Gallery. I’d stand on those cold hard floors all day in a corner on my own and get shouted at if I spoke to any of the other gallery assistants. I wasn’t there long. I met Hannah Lees here. One day I gave her a link to my website and she suggested it would be fun to collaborate on a website together, BUSYSLEEP.com was born. BUSY SLEEP is an anagram of mine and Hannah’s surnames. We hacked up our work in Photoshop along with other artists like Henrik Olai Kaarstein, Donna Huanca and Hannah’s partner (now husband) Jack Lavender. I was a fan of Jack’s work before meeting Hannah and it turned out he was a fan of mine. We’d never spoken or met. Last October we finally did meet, but I’ll come to that later.

BUSY SLEEP existed for a year and then went into a permanent coma offline. By now I was wanting to start doing some projects in the real physical world but had no access to a space. In early 2014 I decided to build a wall in my studio dividing the space in half, creating a gallery I called WELCOME SCREEN. I opened in July 2014 with an exhibition of paintings by Keith Allyn Spencer. I first saw his work whilst browsing the exhibition archive of Oliver Francis Gallery. That space is run by a guy called Kevin Rubén Jacobs – we’d talked a bit online over the years and I finally got to meet him last year when he came over to London during Frieze week. He’s incredibly friendly and enthusiastic in a way only Americans can get away with. I really love Americans.

So I saw the images of Keith’s and became a little obsessed. Opening a gallery was the perfect excuse to get in touch with him and see the work in person. A few emails later, Keith drops a parcel of his paintings in the post, I put them up and we have a gallery and the first exhibition open. I wasn’t really expecting people to come to the gallery, I was more interested in the audience online. Using social media I cast a wide net and pretty soon other artists were getting in touch from far away. Artists like Ian Swanson, Bradford Kessler and Keith J Vardi all reached out and said hi and we began chatting on Facebook. We stayed in touch and over time I invited all 3 of them to show at the gallery. Keith even came to stay here with me. More Americans in my life

Now I had a physical space I got back in touch with Henrik and asked if he’d like to exhibit, to which he said ‘yes’. He came over to stay with me for a week, camping out in my studio and making new works on site. There was a Lutz Bacher show on at the ICA that we both saw and enjoyed. As a leaving present he surprised me with a book of her work that’d he’d bought for me. That was a really nice thing to do.

One day on Facebook I noticed Wendy White had posted a photo from a graduation show at Rutgers University, I instantly loved the work I saw in the image. There was no caption as to whose work it was but I went to the university website and looked through their documentation of the recent graduation show and found it to be the work of Raque Ford. I emailed her and asked if she’d be interested in doing a show at WELCOME SCREEN. She said ‘yes’ and there you go another American in my life.

Ok so Gino Saccone – he’s a bit on an anomaly in this story. When I opened the gallery I specifically said to myself that I was only going to exhibit people I did not know personally. I wanted this to be an experiment in creating and nurturing a completely new network of people in my life. I first met Gino in 2006, when we both enrolled on the Sculpture MA at the Royal College of Art. The first thing I remember about him was he was wearing red shoes. ‘Red Shoes’ – that’s what me and my friend Sarah called him until we found out his real name (actually even after we found out his real name we still called him Red Shoes). Anyway I always loved what Gino made, I can’t even really explain what he does but I get it, so I broke my rules and asked him to do a show. I like to break rules, it’s where the best ideas come from. RED SHOES.

I was chatting with Ché Zara Blomfield who runs a gallery in Berlin called The Composing Rooms and she mentioned a gallery called Courtney Blades I should check out. Ché always has good suggestions. So I went home and did so, which is where I discovered the work of Luke Armistead. Crazy ceramics, great! When thinking about putting this show together I was wanting to include Luke. I’d previously said hi online and told him how much I was into his work, but he’s over in America and his work is so big and heavy I was unsure how I could get it over here. The funny thing is the same week I was thinking about this problem he got in touch with me to say he had a load of his work over in London for a group show and now that show was over do I know anyone/anywhere it could go to be stored until he can work out getting it back to the US. Fate really lined up well here. A 20 minute cab ride and the work was all here with me and now he’s in the show. PROBLEM SOLVED.

Ché is a big fan of Aaron Graham’s work, but I don’t think it was her who introduced me to his work. I can’t remember where I first saw it but I remember what I first saw. These addictive videos where he wanders around NYC pointing at things and saying ‘Look at this’ – he draws attention to a city awash with absurd moments. A landscape in constant flux often kinda collapsing in on itself. ERODE. RENEWAL. COLLAGE. DIE. Aaron did one of my very early virtual exhibitions and then later he had an exhibition at WELCOME SCREEN where he showed some of his wheat paste grids, there’s one in this show too. Anyone can go to his site download and print one off for themselves. What are you waiting for? TICK TOCK.

ebaE caught my eye from a post online, the work was quick and funny but had an awareness that cemented it as something really exciting and smart. They have a website (ebae.cheap) where they sell their products and publish a digital magazine. I bought some stuff and kept an eye on them. By Issue 3 it was clear to me they were onto something. They came and did a show at my space (their first ever) turning it into a shop where everything was available to buy. On the first day they had practically sold out the show. POPULAR CULTURE.

Back to Nico. We had planned for him to do a solo show at WELCOME SCREEN, but a little before it was to open he decided to invite two other artists to show with him, Francisco Cordero-Oceguera and Puppies Puppies. I’d spoken with Fran online before, he runs a gallery in Mexico City called Lodos. I first saw his work in images of a group show that were uploaded by NO SPACE. NO SPACE was a gallery run by Débora Delmar and Andrew Birk in their apartment in Mexico City. I saw some works I liked but there was no caption so I contacted Déb or Andrew (I can’t remember which) and was told it was Frans work, so I messaged him to say hi. Turned out he was also showing some of Aaron’s work at Lodos. SMALL WORLD.

Despite her living in Mexico City, I’ve seen quite a lot of Débora. I asked her to do a show at WELCOME SCREEN a year and a half ago. A few months later she was asked to do a show at Modern Art Oxford so she was going to be in the UK for a bit, cool. She’s still here in London at the moment, curating a show called ‘People You May Know’ at Bosse & Baum – she invited me to be in it. Thanks Déb! I think I first really became aware of her work when Ian Swanson curated a show through his curatorial collective Hotelart.us at Sadie Halie Projects In Brooklyn. Débora exhibits under the name Debora Delmar Corp. – just so you know.

I’d been following Puppies work for a while by this point too, he had showed at Oliver Francis Gallery. Kevin has a good eye. Nico arranged to come stay with me and about a week before his arrival it turned out Fran was coming to London too and needed a place to stay so I said he could crash here too. Nico arrived a few hours before Fran. We sat on my bed watching American Horror Story and when Fran arrived we walked over to Stratford and ate bowls of Pho in Westfield Shopping Center. I’d never eaten Pho before, it was good. Puppies was in town to do a performance here at Evelyn Yard. He came by my space to install his work, so I finally got to meet him too. WOOF WOOF. The work included live leeches, they were funny little things.

Nico and Fran had a friend called Temra Pavlovic whose work Fran had shown at his gallery. She had come over to London to hang out with them. She was staying in a place which was a little far away from us so I invited her to stay at my place with us for the week. Easier for her and she get’s to see more of Fran and Nico. FULL HOUSE.

We all went to a Timur Si-Qin opening one eve at Carl Kostyál – where I spotted a guy that I thought looked like Jack Lavender. I went up to him and said ‘Hi, are you Jack Lavender?’ He replied ‘Yes’ and I said, ‘Ah cool I’m Michael Pybus we kind of know each other but we don’t know each other. I thought it was you. I’m glad I was right otherwise this would be really weird right now.’ Jack and I hung out and a little later on Hannah came over and was like ‘Hey you two have finally met!’ Jack and I pretended we didn’t know what she was talking about or who each other was. FUN LIES.

At the end of the week Fran and Nico (in my head I call them Frico) left a few hours before Temra, so Temra and I went to the Royal Academy to see the Anslem Keifer exhibition, it was a great end to the week. Temra gave me an Amaryllis bulb (she’s Dutch so that makes sense), it bloomed a couple of months ago. Big red and white flowers. Red, RED SHOES.